What is a TED talk? What is the Difference Between TED and TEDx?

What is the Difference Between TED and TEDx?

A complete beginner's guide to TED vs TEDx. In this in-depth guide you’ll learn:

So, if you’re ready to go “all in” with TED talks and events, this guide is for you.

At the same time, there are also many TEDx talks. You might hear about TEDxNewYork, TEDxToronto, TEDxLondon, and plenty of other TEDx events.

So, what is the difference between TED and TEDx? They seem very similar.

To find that out, let’s start with the very beginning and look at how both TED and TEDx started and then see how different they are now.

If you want to speak at a TEDx event then check this detailed article on how to become a TEDx speaker.

TED is a non-profit media organization founded in 1984 as a conference where speakers have a maximum of 18 minutes to present their ideas, experiences, and stories. The first event lost money so it took six more years for Richard Saul Wurman and his co-founder Harry Marks to bring a conference back and turn it into an annual event.

At that time, it was an invitation-only event. Still, it attracted a lot of people from a variety of backgrounds.

What does TED stand for in TED talk?

TED stands for Technology, Entertainment, and Design with the slogan “Ideas Worth Spreading.” These were the three major topics originally presented at TED events. Today, it covers a variety of topics in over 100 languages allowing new people to bring their points of view.

What is a TED talk?

A TED talk is a short speech, demonstration, or performance around a big idea that is meant to educate, shift people's perspectives to encourage positive changes, or provoke conversations that matter.

The purpose of the TED talk events is that people with different experiences and disciplines could come together to share their knowledge, understand each other and transform people's lives around the world.

Before, TED events always had been exclusive and expensive.

Until June 27, 2006, when the first six TED Talks were posted online and shared with the world.

What began as a small conference is nowadays two annual events — TED and TEDWomen — as well as occasional deep-dive conferences and events such as TEDSummit, TEDGlobal, and more.

The main TED conference is a 5-day event that is held annually in Vancouver, British Columbia, Canada.

It includes more than 70 speakers from the world's most admired companies as well as emerging artists, scientists, and thinkers.

Reservations for the annual TED event are limited to 1,200 attendees.

Later the speeches are uploaded to the ted.com site and their YouTube channel where you can watch them for free.

What exactly is a TEDx talk?

TEDx talk is a short presentation with the purpose of sharing ideas that people have never heard or challenging your beliefs and perspectives. Just like TED talks, they have a similar format with a variety of topics. TEDx speakers also have to express their ideas in less than 18 minutes.

However, it’s much easier to become a TEDx speaker than to be a TED speaker because the standards and requirements are not so high.

And here is why:

When the TED organization started publishing TED talks online in 2006, people all around the world began sharing them with their friends and colleagues.

And many of them wanted to have something like the TED conference in their local community.

They desired to feature their local leaders, share ideas relevant to their regions, and let other people attend the event that doesn't cost $10,000.

What is a TEDx event?

TEDx event is a smaller conference that follows the TED standard and practices. However, x means independently organized, allowing smaller local events with the TED spirit. Anyone can apply to become a TEDx speaker and present their ideas with the style of the official TED conference.

While there are only a few TED events per year TEDx events are hosted regularly.

Besides TEDx events associated with a city (like TEDxSeattle), there are also TEDxYouth, TEDxEducation, TEDxWomen, and TEDx corporate events around the world.

This sometimes creates a misconception and raise a question:

Why is TEDx called TED?

People often call TEDx talks as TED talks because TEDx events are organized in a TED conference style. So, when someone says that they watched a TED talk that could be a TEDx talk as well. Also, many people who plan to become a TED speaker actually mean to apply to a local TEDx event.

It’s easy to get confused with them.

Also, good TEDx talks may get featured on the ted.com site.

Some of them become as popular as TED talks. No wonder people call them all TED talks.

So, if you ever wondered "What is a TED talk?" then here is an illustrated summary for both TED and TEDx.

With all of that, here is the difference between TED and TEDx events.

What’s the difference between TED and TEDx talks?

The main difference between TED and TEDx is that while TED talks are global, TEDx focuses on the local community. Because of that TED events are big, more difficult to become a speaker as the competition is very high, and not everyone can pay $10,000 to attend them.

Although if you’re selected to become a speaker the organizers will pay for your travel, hotel accommodation, provide all five days of TED conference pass. You will also get pre-conference coaching and training, and some other benefits.

The regular TEDx events can have only 100 people unless organizers attended a TED conference. Then they can organize TEDx even with more people.

TED is an independent organization that sets all the rules. The main TED event is produced by TED officials.

To host a local TEDx event people need to apply for a free license from TED and follow their standards. There is also a set of requirements for the organizers to keep the TED spirit on their events.

Still, anyone can organize a TEDx event if they get the license.

Because of that, there are more TEDx events and as a result more TEDx talks than TED talks.

As you can imagine, TED organizers get a ton of submissions to become a TED speaker.

Have you even dreamed about speaking at TED or TEDx event?

If you want to give a TEDx talk then read this essential guide on how to become a TEDx speaker. 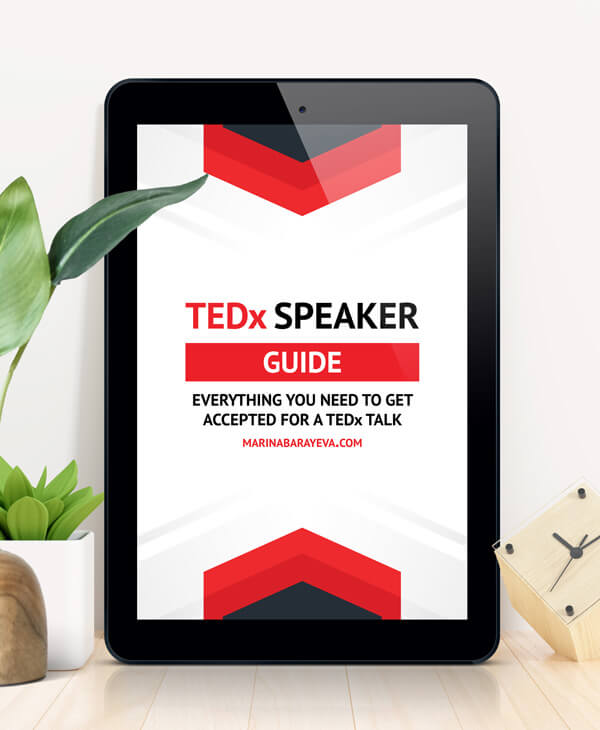 WOULD YOU LIKE TO LAND A TEDx TALK WITHIN THE NEXT FEW MONTHS?

Then, get this guide with 12 steps to follow and checklist on what to prepare to get a higher chance to get accepted.